docker - connecting your host to a container

Phew! Spent a few hours on this and finally i was able to get it right.

Task :- Spin up a new docker container running my app and connect to it from my windows host.

Sounds simple enuff, I think the biggest gotcha is setting your application port to "0.0.0.0" instead of "localhost", as shown in diagram below. 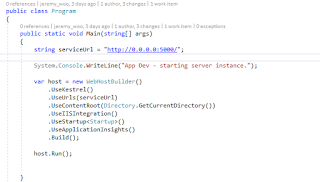 Here is my docker file


And then i use the following command to spin up my docker.

docker run -P accmicroserve (if you do it this way, you might get a random PORT from your container)

Your docker instance already started, and ready to go.

Popular posts from this blog


The fix, just add this in to your local.settings,json

Solving Sonarqube :- Project was never analyzed. A regular analysis is required before a branch analysis

March 11, 2019
This means :- sonarqube don't have any info about your project. you need to setup your project in sonarqube.

At the end of the dialog you will get Login :- which is a has and Project Key.

Then you pass those info into MsBuild or whatever build tools you currently using.

You can try using the following command line

Jeremy
Asking the obvious question, maybe not so obvious after all.....